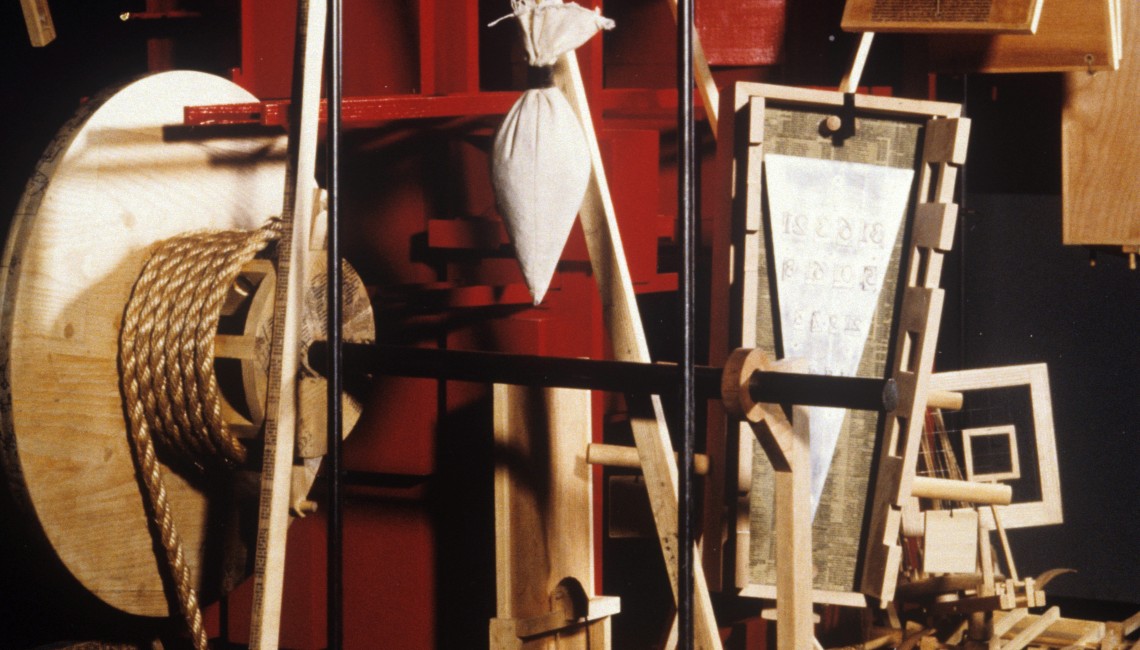 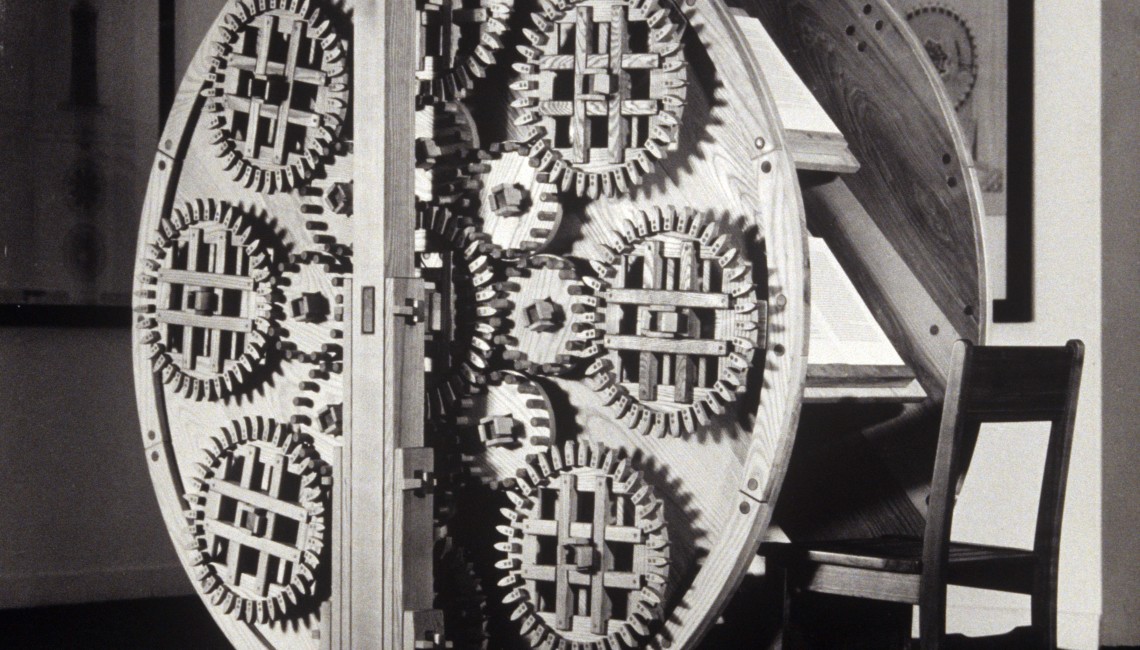 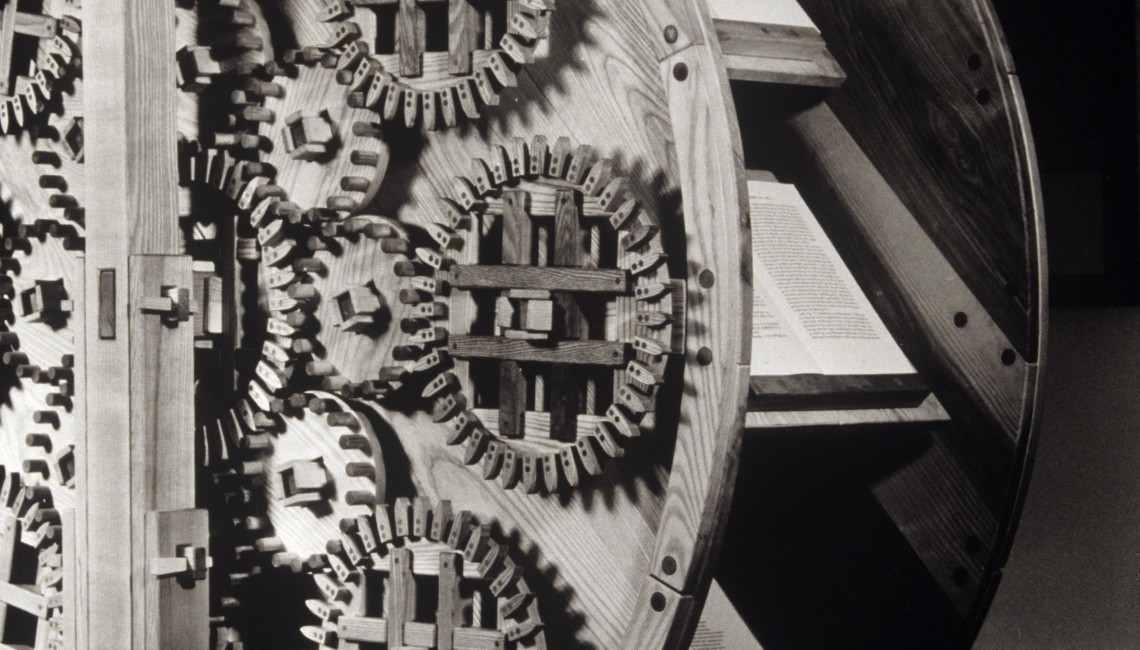 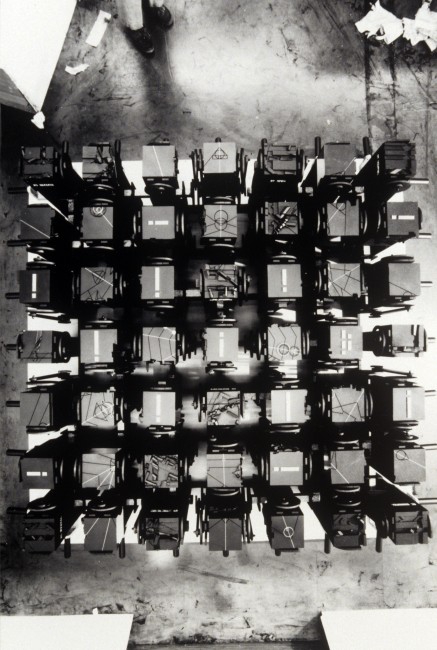 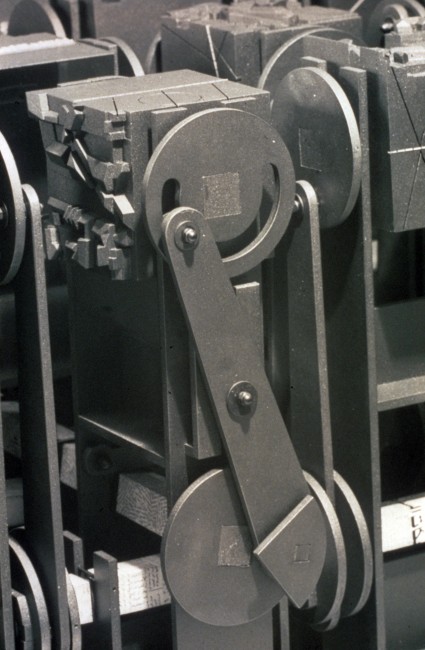 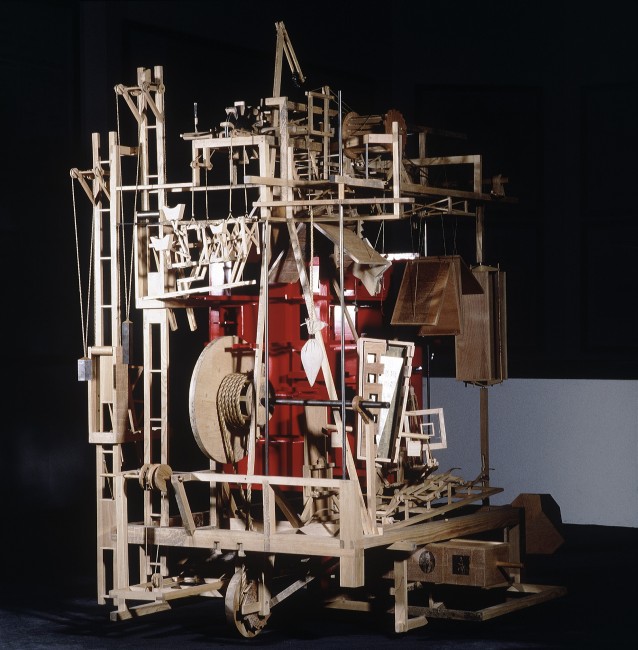 The Space of Encounter, by Daniel Libeskind

Three Lessons in Architecture: The Machines

Installation, Venice Biennale, 1985 The proposal deals with the city and its architecture in the form of participatory engagement

with three large machines. The public is involved with creating and interpreting architecture in its broad social, cultural, and historical perspective. The three machines propose a fundamental recollection and a retrieval of the historical destiny of architecture; a singular, if unexpected, homecoming. This mechanism constitutes a single project: Each segment forms a starting point for the understanding and functioning of the others. Together they form a cycle in which projects are seen, explicated, and overcome. As metaphysical equipment the three machines and their respective architectures seek to release each of the future sites unto themselves, thus letting the present remain a given, even as it moves toward its own past.

Reading Architecture Teaches an almost forgotten (medieval) process of building, a process that is in its own way not yet fully unfolded in architecture. Like the medieval monastery out of which the Reading Machine l emerged, the method of construction and the technique of understanding bring about a revolution of architecture’s techne, which coincides with the movement of the text that it propels. As a place of intersection between archaeological reconstruction (Ramelli, Palmanova, military engineering) and the will to power it discloses (metaphysics, monasticism, ideology), the Reading Machine reveals the tautological reality of the architectural text. The Eight Books-each a single word uttered by the forgetfulness of being that resolves itself by turning back in order to come forward-lie on eight shelves. The books come and go for a comparison not only with each other, but with the weight of the last seven words of metaphysics, which crush the gears and axles whose relation is inaccessible from the reading position. The wheel revolves, and in compelling a revolution returns to its starting point while exposing its own uselessness and kinetic beauty. _ Executed in a “medieval” manner, with glueless joints and using no energy of contemporary kind, this machine represents the triumph of spirit over matter, of candlelight over darkness. It is made solely from wood, as are the books.

Remembering Architecture Consists of that which can still be remembered in architecture. As a historical program the sites have been filtered through Giulio Camillo’s Memory Theater. As a precise weaving of the memory tradition with the agony of a deus ex machina, this theater represents the workings of a Renaissance mind and shows its internal equipment and the arrangement it reveals. _ The Memory Machine2 consists of the backstage only-the spectacle takes place wholly outside of it. As a mechanism for projection, concealment, and illusion, this prosthetic piece of equipment exposes and hides the Venetian projects.

Since the process of its construction remains in the classical arena (imagination, measurement, idea), the subversive element of mechanics (Teatro Farnese versus Teatro Olimpico) enters only in those places where memory has succeeded in retaining its surrogate authority. – As a ghost of humanism’s cosmic hubris, the Memory Machine seeks to disengage the sites from the Earth in order to return them to their original, destined locus: Joyce’s Dublin and Tatlin’s Moscow. _ Done in a Renaissance style of being, the Memory Machine abounds in the kind of inventiveness and caprice that we associate with the Odradek. – It is executed in wood and retains in its structure the “hanging papers” seen by the king. This project represents the stage of architecture’s appearance and is a testament to its own manifestation. Also made of wood are the eighteen subordinate spectacles, which include the “cloud machine” and the “schizophrenic forum.” Colorless: The bloody red illuminates the shiny exterior of an inner sanctum dedicated to what remains nameless. Metal is used exclusively for non structural reasons, related as it is to light itself. Ropes are used throughout.

Writing Architecture Teaches the artless and science less making of architecture. As a fully engaged project this machine industrializes the poetic of architecture and offers it as a sacrifice to its own possibilities of making a text. Architecture, like shoemaking, becomes a problem of putting the nail in the right place. _ Since the Writing Machine3 processes both memory and reading material, it takes what is projected into an exact account. Not only the city itself (Palmanova) but all places written into the book of culture as here collected and disposed. _ Through an enlightened vision the random mosaic of knowledge is gathered together into seven times seven faces, each mirrored in a quadripartite realm. The totality of architecture is shattered by the foursome reciprocity of Earth, sky, mortals, and gods, and lies open to a contemporary stocktaking. _ The four sides of this “Orphic” calculator, or probability computer, prognosticate the written destiny of architecture, whose oblivion is closely associated with Victor Hugo’s prophecy. The four-sided cubes work in the following Swiftian manner:

Side I: The City as a Star of Redemption is refracted and congeals into a “boogie-woogie” constellation.

Side 2: Is a metalliC reflection that shatters and disrupts the spatial-mathematical order of the forty-nine times four sides.

Side 3: Consists of a geometric sign, which points to a graphic omen or architectural horoscope.

Side 4: Enumerates the forty-nine saints who accompany the detached pilgrim in order to care for his unerasable vulnerability.

Thus the oppositions and complementary reciprocities that glide through the whole constitute a “destabilized technology,” which would break up the mechanism instantly if the computerized controls (twenty-eight handles) weren’t there to keep it stable. The Writing Machine is the first totally unstable text. As opposed to “stable” architectural texts, which best fly in a straight line of myth and resist the pilot’s effort to climb, bank, or dive, this “unstable” prototype is extremely agile, having no natural flight path. – It jumps around the text’s sky and is guided by an “active control system,” which can perhaps never again disclose its starting position (see position at the beginning; see position at the end). The Writing Machine is a contribution to Roussel scholarship. It links Africa and the impressions of Italy through those miraculous figures whose presence is both inevitable and contingent. Angelica, with a grid, burnt on a grid; St. Donatella; Mossem killed by the burning of text onto his feet, killed by burning iambic text into forehead; St. Theodor of Constantinople. By rotating the “foursome,” the arrangements arrangements appear ready for interpretation. These seemingly random relations are generated by an extremely sophisticated system, which consists of 2,662 parts, most of them mobile. All are involved in an unpredictable rationalization of place, name, person. Once in motion, the stockpiling and accounting of places, Cities, types of buildings, gods, signs, saints, imaginary beings, forgotten realities will present almost unsurmountable difficulties for the operator, yet these are difficulties that can be eliminated through the revolutionary discipline of this turn toward a Buddhism of action.