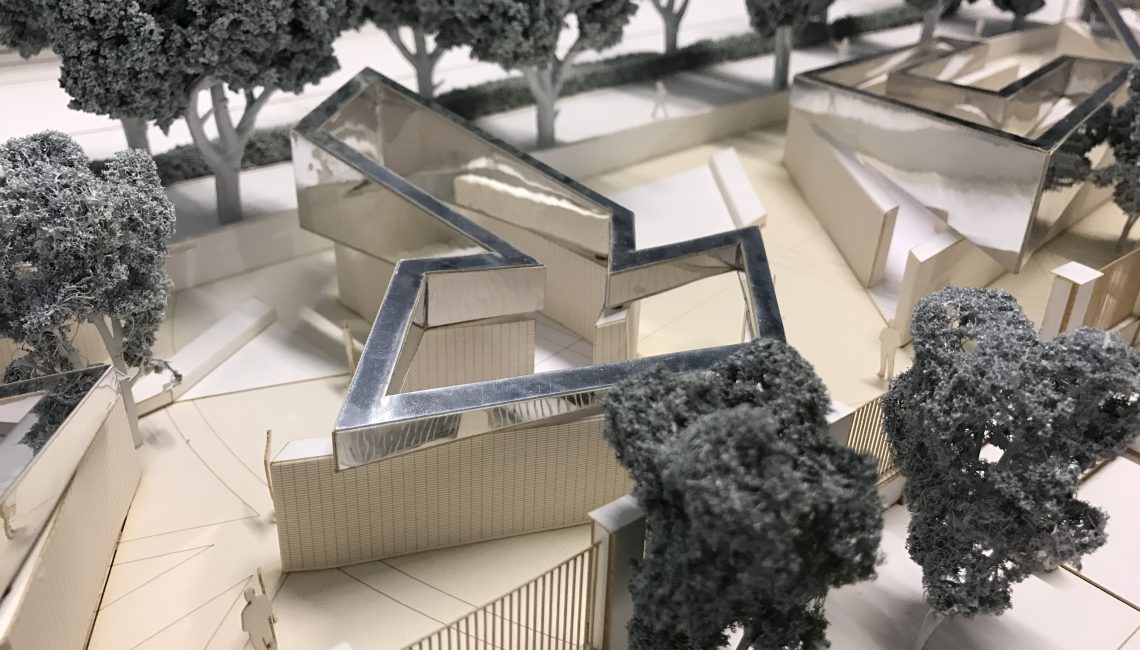 NYTimes: Holocaust Memorial is Closer to Reality in Amsterdam

Situated along the Weesperstraat, an important axis within the Jewish Cultural Quarter, the Dutch Holocaust Memorial of Names is adjacent to the Hermitage Museum, East of the Diaconie’s verdant Hoftuin garden and café, just a stone’s throw from the Amstel River and in close proximity to important Jewish cultural institutions such as the Jewish Historical Museum and the Portuguese Synagogue .

The 1,550 square meter memorial incorporates four volumes that represent the letters in the Hebrew word לזכר meaning “In Memory of”. The volumes are arranged in a rectilinear configuration on the north-south axis of the main thoroughfare Weesperstraat and the Hoftuin pavilion to the East.

As visitors enter the memorial they will encounter a labyrinth of passages articulated by two meter high brick walls carrying the message of Remembrance. Each of the four volumes are crafted from mirror finished stainless steel that hovers above the walls of individually stacked bricks. 102,000 bricks will each be inscribed with a name, giving a tangible quantification to the many casualties, as well leaving 1000 blank bricks that will memorialize the unknown victims.

The materiality of the brick—a ubiquitous material of The Netherlands and throughout the cities of Western Europe – paired with the highly reflective and geometric forms of the steel letters reference the connection between Amsterdam’s past and present. At the intersection of the brick and metallic forms is a narrow void that creates the illusion that the steel letters are hovering above and represents an interruption in the history and culture of the Dutch people. This suspended emptiness, or ‘Breath of Air’, detaches the neighborhood from a future in which Dutch-Jewish families went missing.

Below grade level, the floors within the walls are of a light concrete finish to articulate the letters as well as create a path through the four volumes. The area outside the letters will be of a darker, porous substrate, such as stabilized crushed stone. Inscribed in it are the geometrical construction lines that form the Star of David. Simple concrete blocks are placed in the open spaces and walkways to provide a resting place for contemplation and reflection At night, the underside of the metal letters will illuminate the area to guarantee the reading of the names at night and will trace the open horizon to visualize the suspended emptiness. Situated next to a subway station to the south and a roadway to the west, the floating polished steel volumes will be visible to commuters during all hours. Light and Reflection (self-reflection as well as reflection from the street and the city that surrounds it) are necessary for a meaningful understanding of what happened and the lives lost in the catastrophe of the holocaust.

The Dutch Auschwitz Committee is actively fundraising for the memorial. The public may adopt a name to help realize the memorial. For more information about the memorial or purchasing a brick visit: www.holocaustnamenmonument.nl

The memorial is slated to break ground in 2019.